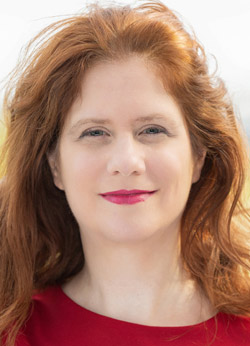 With singular dedication and uncommon courage to break new ground, Irene Kurka has developed programs for soprano solo that embrace the whole performance space. Powerful and at the same time delicate, her clear voice rings out, at times projecting a majestic presence, but other times not shy to take risks by laying bear her voice’s touching fragility. In her lively interpretations, Irene Kurka is always experimenting and seeking new ways to present contemporary and classic music in concert.

As an interpreter of new music, Irene Kurka is an internationally sought-after singer for concerts and stage productions. Numerous composers (such as Eggert, Corbett, Weeks, Muntendorf, Pisaro, Fox, Haussmann, Seither, Beuger, Brass, Frey, and other) have written works for and dedicated to her, including works written for CD and radio productions. To date, she has sung over 280 world premieres.

For a number of years, Irene has focused on exploring the repertoire for solo voice in concert (including the music of Hildegard von Bingen, Nono, Berio, Cage, Lucier, Beuger, Bauckholt, and Brass). Her 2012 CD of songs by Bingen und John Cage (a coproduction with the label Wandelweiser and the Bayerische Rundfunk) won high praise from critics. After the success of her solo program “Prayer” at the Huddersfield Contemporary Music Festival 2013 at the invitation of the festival director Graham McKenzie, she was also invited to sing this program at hcmf//@ l’Auditori in Barcelona. In 2015, the CD “Beten.Prayer” for solo voice was released. In early 2017, she was featured on the CD “chants” for solo voice featuring works by Christopher Fox, Antoine Beuger, Eva-Maria Houben, and Thomas Stiegler. In 2018, “Klavierlieder” by and with Eva-Maria Houben and the CD “Ohrwurm” with piano lieder by and with Moritz Eggert were released.

In the area of music theater, Irene Kurka has worked closely with the composer Christina C. Messner since 2008, with projects such as Simone de Beauvoir, “Salome-Extrakté”, “Love Songs for Heim@t”, Francesca Caccini and an inter-religious Requiem. With the composers Beuger, Brass, and Houben, she developed the concept for an evening-length performance with three solo operas, which was performed in Munich, Düsseldorf, and Theater Dortmund in 2012. In collaboration with the composer Karin Haussmann she developed the evening-length performance “Eine unsterbliche Geliebte” [an immortal beloved] for the 2017 Beethoven Festival Bonn. Since 2018, she has also been a part of a music theater project that stages performances in the subway stations of the newly built Wehrhahn Line in Düsseldorf.

The versatile soprano has already been awarded several prizes and scholarships. In 2013, Irene Kurka received the Wolfram von Eschenbach Prize for Young Artists presented by the region Middle Franconia, and in 2014 she was awarded the Young Artist Prize for Music from the city of Düsseldorf.

In April 2018, Irene Kurka launched the podcast “neue musik leben” as a platform to share her wealth of experience working as a soprano and to make new music more accessible to a wider audience. She is cooperating with the nmz (Neue Musikzeitung). She has published two books about her experience with "neue musik leben", the third and last book in this series will come out in fall 2022.

Irene Kurka has been featured as a soloist in leading concert venues including:

Irene Kurka studied voice at the Musikhochschule Munich, Southern Methodist University Dallas, USA, and the University of British Columbia, Vancouver, Canada. In addition, she completed a masters of medieval music at the Folkwang University of the Arts in Essen.

Her work as a teacher has taken her to the HSD PBS Duesseldorf, Academy of Music in Poznań, TU Dortmund, Guildhall School of Music and Drama London, Musikhochschule Mannheim and Wuppertal, conservatory Maastricht, and the program “Jugend komponiert” for school-aged composers at Schloss Rheinsberg.